Is A Robotic Manager In Your Future?

Is A Robotic Manager In Your Future?

If you think that reporting to a younger manager is a challenge or that managing upwards is tough, how well would you fare with a robotic boss? Gartner revealed its top predictions for IT organizations and users for 2016 and beyond with a strong emphasis on the digital future. Read more →

Self-reinventions present you with a number of benefits, the obvious one being a transformative you. But contrary to what many people believe, transformation doesn't happen by chance just because you decide to change jobs or leave a career to start-up your own micro-business or even a start-up. A good rule of thumb is that the greater the change the earlier you'll want to begin the process of stress testing your systems before launching the new Product of You. So, what types of changes might require less time and where would you want to introduce longer lead times? Consider the following when pulling together your transformation strategies. Read more →

What a difference a year makes. During a CES 2015 panel John Chambers, former Cisco CEO, made the following statement: "You either disrupt your industry, disrupt yourself, or become a victim of disruption," he said. A few months later, Chambers announced his succession hand-off to Chuck Robbins, a long-time Cisco insider who had led its worldwide field operations as senior VP before being handed the CEO reins. Read more → A blueprint for innovating and thriving in uncertain times. 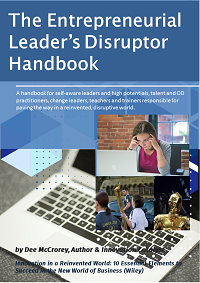